Football for Unity: A Festival of Hope & Celebration

July 10th 2021: Over 100 young people came together for the Football for Unity Festival, to demonstrate first-hand the power of football in creating unity, fostering understanding and promoting acceptance of people from different backgrounds and cultures.

Hosted by TV personality Ben Cajee, at the Black Prince Trust Community hub in Vauxhall, the Football for Unity Festival was delivered by Street Child United in partnership with UEFA Foundation, the European Football for Development Network and Street Football World. The event was a culmination of an 18 month initiative designed to create a lasting legacy for the European Championships 2020, showcasing how football can support social inclusion – specifically for third country nationals and refugees.

The day centered around a five-a-side football tournament in which 15 teams competed, representing football foundations and programmes from across London and beyond. The line-up included teams from: Charlton Athletic Community Trust, Crystal Palace Foundation, Everton in the Community, Fulham Foundation, Girls United, Harris Academy South Norwood, Pro Touch SA, QPR in the Community, Street Soccer, Tottenham Foundation and Watford FC Community Trust. In a closely fought tournament Charlton prevailed as winners of the boy’s tournament whilst Girls United took the title in the girl’s competition.

Away from the pitch, participants attended two dedicated workshops. The first workshop, ‘Make a Society’, explored how diversity manifests in society, and it’s benefits. Participants considered the difficulties and opportunities of living in multi-cultural societies, and what values drive this. The second workshop, ‘Advocacy in Football’, looked at how sport can help advocate different social causes. The young people discussed the definition of discrimination, identified famous refugee footballers, discussed campaigns like ‘taking the knee’ and created their own protest placards about key social issues important to them.

The day also welcomed a number of guest speakers. Proceedings kicked off with an official welcome from Alex White, Deputy General Manager and Head of Quality Assurance and Governance at the Premier League Charitable Fund, before he handed over to Shaygan Banisaeid, an asylum seeker who arrived in the UK from Iran two and half years ago. Shaygan had always dreamed of being a football coach and now, through the support of ‘Football Welcomes’ – a programme delivered by Amnesty International – he is well on his way to turning that dream into reality. His message to the young people was clear and resolute:

“Believe in yourself. You can be whoever and whatever you want to be, no matter your background, just do not give up on your dreams.”

Street Child United Young Leader, Jasmin Akter also addressed the young people. A Rohingya refugee, Jas was born in a refugee camp in Bangladesh before her family moved to Bradford at the age of 7. Her story resonated with a lot of the participants who had also been on their own relocation journey; whilst inspiring others to understand the challenges faced by people forced to leave their countries and resettle in new communities.

The event wrapped up with the trophy presentations and an address from UNHCR protection associate Alan Deve, who spoke about the importance of sports role in helping create inclusion:

‘Sport is a powerful social tool in helping refugees and migrant populations integrate into societies. Not only does it transcend language barriers, it promotes values such as teamwork, respect, diversity, equality of opportunity and fair play.’

John Wroe, Street Child United CEO handed the final words of the day to SCU Young Leader, Sam Richards who summed up the event perfectly when she said:

‘Today has been a strong and positive reminder of how football can be such a uniting force, bringing us all together, letting us meet one another and sharing in the fun and joy it brings.’ 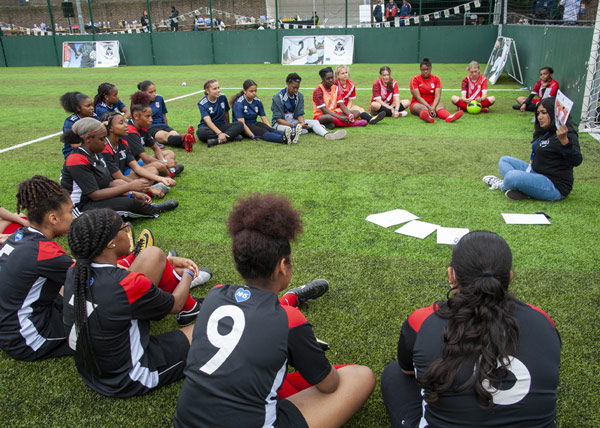