The 2014 Street Child World Cup, organised in association with Save the Children, exploded into life today with the official opening ceremony enjoyed by a capacity crowd at the Lonier Maracanã.

Renato Rocha, of Nós de Morro and formally the Royal Shakespeare company, directed the opening ceremony, which opened with an athletes parade to the soundtrack of the official Street Child World Cup anthem: I am Somebody. 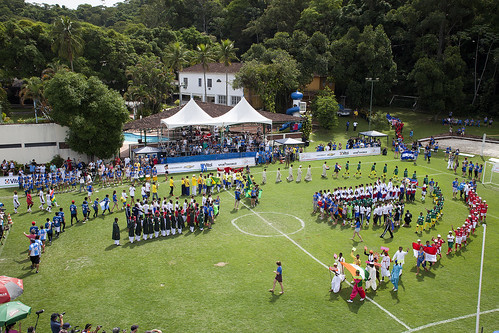 Then there was an address by SCWC co-founders John Wroe and Chris Rose, during which Chris Rose showed his gratitude to the Street Champions present: “We have a message for the kids. We’d like to thank them for travelling so far to be with us, and for representing their country and street children all over the world. Thanks for coming to the world cup that matters most.”

Adrian Reith, Chair of Street Child United, read a message of support from Prince William, who said: “This fantastic tournament shines a spotlight on the 100 million children around the world living on the streets. It unites them through the universal language of football, and gives them a global platform from which to be heard.

“It is my great hope that this event will help to ensure that more children are afforded the bright and happy future every one of them deserves.”

Luis Boa Morte also made a presentation of Chevrolet One World footballs to players from Team Indonesia girls and Burundi boys, who accepted them on behalf of all street children around the world.

Players from Mozambique, El Salvador and England and Team Leaders from Kenya, Argentina and Brazil read the SCWC oath of fair play.

Dom Orani Tempesta, the Archbishop of Rio, reading a message from the Pope. In the message Pope Francis said: “The Holy Father is pleased to offer his support to the Street Child World Cup tournament 2014 and cordially imparts to all the participants his Apostolic Blessing as a pledge of abundant graces.”

The Archbishop then addressed the crowd, telling the story of Rodrigo, a member of the Brazilian squad to play in the 2014 Street Child World Cup who was tragically killed just six weeks before the tournament.

Finally the ceremony concluded with a performance of Tshotscholosa, led by the Team South Africa but quickly joined in by the rest of the teams and the crowd.The 2014 Street Child World Cup is officially under way.